What is Python used for? Key benefits and examples of products 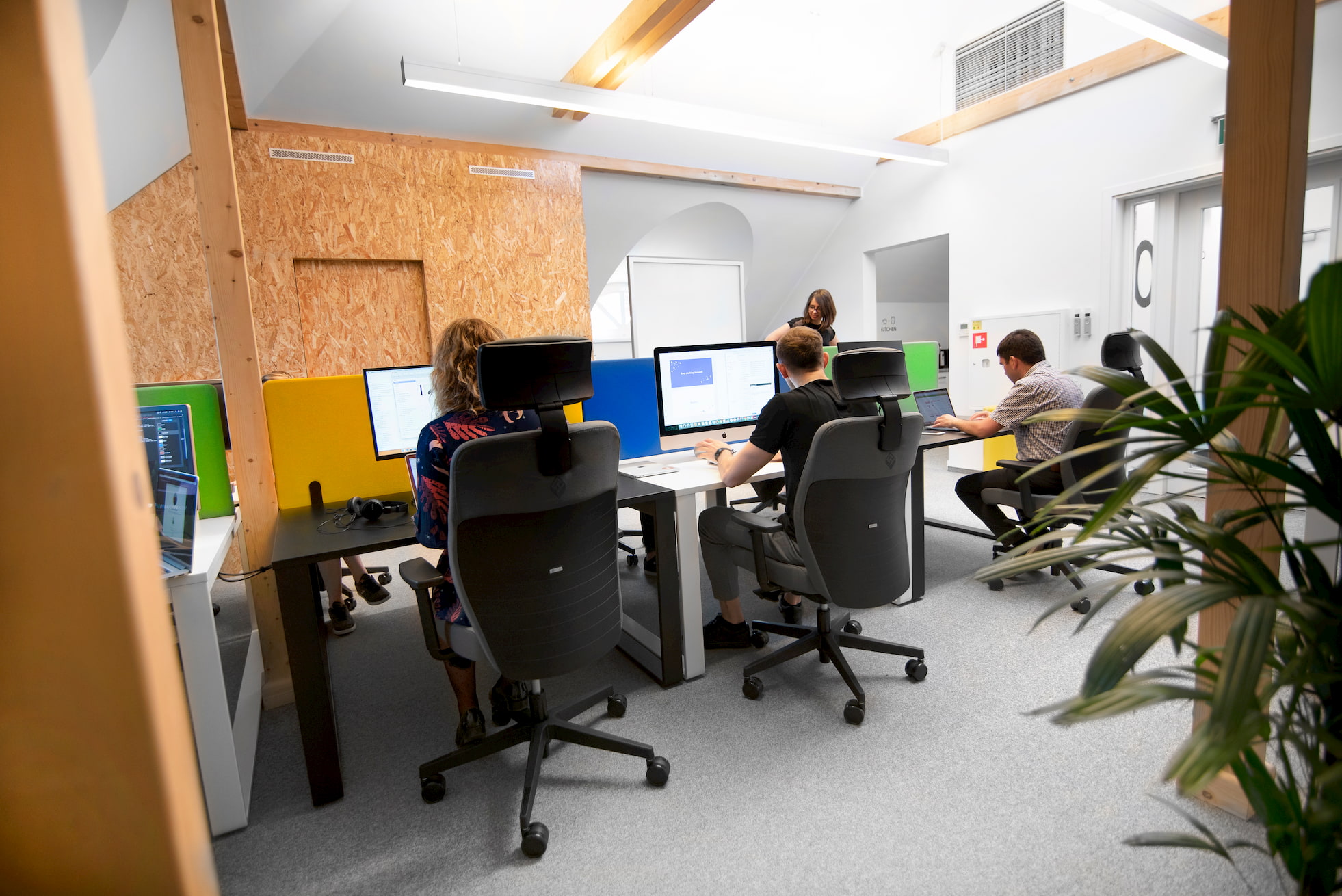 Python is currently one of the most popular and widely used programming languages. If you want to find out what is Python used for, why the number of companies using it is constantly growing, what are its main business benefits, and why developers worldwide love it, then I encourage you to read this article.

Do you wonder how Python could benefit your product idea? Let’s talk about this!

Python, the most popular programming language among developers

Before going in-depth into explaining what is Python used for and how does it work, let me give you a bit of background. Python was released in 1991, so it has already quite a long history. It’s an interpreted, object-oriented and general-purpose programming language. Simplicity and readability lie at its core, it’s meant to be easy to use, but at the same time able to build complex solutions.

Currently, Python is developed, managed and promoted by Python Software Foundation, a non-profit organization that fosters the growth of the Python community, which, to be fair, is really thriving nowadays. You can find lots of Python conferences, courses, tutorials, free resources of all kinds—this makes it extremely accessible even for non-experienced developers. Actually, Python’s learning curve is considered to be one of the easiest of all programming languages, therefore it’s used in many introductory software development courses. That’s why many beginners start their programming adventures with Python.

Recent research confirms that Python is the most popular programming language (based on the number of tutorial searches in Google), and if it’s not enough, it’s also the most wanted among developers, according to an online survey conducted in 2019.

Python is mainly used for backend development purposes: this part of a website or an application that is not visible to users, but ensures that all functionalities work as desired. However, some of Python frameworks such as Django are perfectly suitable for frontend web development as well. That’s how flexible and multi-purpose this language can be!

Now let’s discover why exactly developers and businesses across the world love Python so much. From my perspective, the key benefits of choosing Python for your new product would be the following:

It’s universally acknowledged that Python is one of the most versatile programming languages. As it can be used for so many purposes, it will fit a wide array of projects. Whether your project is a prototype, desktop software, web application, or a complex enterprise software—Python has you covered.

One of the main principles of Python is simplicity, which translates into a really fast development process. Thanks to many reusable elements and code pieces shared by the vast community and available free of cost, coding in Python is even more easy and swift. This is of utmost importance particularly for early-stage startups that aim to create their MVP rapidly and release it to the market as soon as possible.

One of the greatest things in Python development is the availability of plenty of ready-to-use modules, packages, components, libraries and frameworks available on The Python Package Index website. Using these resources, developers can significantly reduce coding time, as many necessary programming tasks have already been scripted and included in the libraries.

Python has a built-in framework for unit testing. Unit tests permit checking small pieces of code even before the whole application is ready. This leads to fewer bugs in the final product and saving time that would be spent on finding those imperfections. As a result, the code is of better quality, the product is delivered faster and at a decreased cost.

Integrations easier than ever

Maybe you heard that some people refer to Python as “glue language”. Indeed, it has some “magic glue” features: it integrates easily with most of the programming languages and therefore is capable of interacting with other technologies and platforms. What is more, the PyPI software repository gives thousands of third-party modules at users’ disposal, and thanks to that they can integrate Python with other services effortlessly.

What is Python used for?

As I’ve mentioned before, Python is one of the general-purpose programming languages, meaning that it has multiple uses. It’s worth mentioning that recently we observe a rise in Python usage in certain types of highly innovative projects:
‍

Python is a very good choice for processing vast amounts of data. Moreover, because of multiple libraries and frameworks, big data processing becomes much easier than you think. Additionally, complex data science algorithms are less painful to write thanks to uncomplicated syntax.
‍

Nowadays, Python is one of the essentials for machine and deep learning developers, mostly because of the simplified syntax that makes it less burdensome to write complicated algorithms, and once again, a wide range of libraries that are of great use in machine learning. These are the most popular:

And another good news is that these resources are open-source and free to use! Saying that Python brings artificial intelligence to the masses is not an exaggeration.
‍

Python gains popularity in the Internet of Things field as well. IoT requires high-level programming language with significant code readability, but that can handle complex data at the same time. Among countless Python packages, there are many that are also useful to develop IoT products.

Django framework: the what, the why and the how

Django is one of the most widely used Python frameworks for web application development. It’s free and open-source, and its main assumptions are similar to those of Python: simplicity, flexibility, reliability, and scalability. Django offers the highest level of data security and ensures the best information storage and recovery.

With Django, developers can build complex, custom web apps rapidly, and flexibly respond to the changing business needs and market conditions. What is more, it adopts the “batteries included” approach, meaning that it comes with all the essentials needed to solve common cases in backend development. Out-of-the-box Django resources can help you tackle such challenges as URL routing, session management, security, and database manipulation.

Django relies on the MTV (Model-Template-View) programming paradigm, meaning that the user interface of web app and business logic are independent, which gives developers more flexibility and speeds up their work. It also has a ready-to-use admin panel (interface) for administrative purposes, that can be additionally customized. Using the admin panel, developers can significantly save time spend on creating, viewing, updating and deleting records, as well as managing data in production.

What companies use Python? Is it for startups or enterprises?

Due to its versatility, you can find products developed in Python among both startups and huge enterprises. For instance, as I’ve mentioned before, startups love Python because it reduces their time-to-market: it allows them to develop products fast, reduce costs, and quickly create an MVP that can be tested by end-users. Because of a large number of data science and machine learning libraries, Python is often chosen by AI-first, innovative companies.

On the other hand, mid-to-large sized businesses and enterprises also find Python beneficial for their software development. These companies often work with numerous legacy systems from different providers, external databases, desktop applications, etc. Python allows them to integrate these diverse solutions and ensure the correct flow of data because it interacts so easily with other programming languages. Moreover, Python is considered a secure technology, which is a key factor when dealing with sensitive data and business information.

The list of companies that use Python in their websites and products would be huge, including giants such as Google, General Electric, Netflix, IBM, Instagram, as well as innovative and fast-rising startups.

Over the years, we have used Python in several big projects for our clients and we have experienced the many benefits of this programming language.

One of the best examples is Adquesto, an ad-based paywall that we developed in the collaboration with a startup that aims to change the game in the advertising industry. This solution adopts the so-called questvertising—users can access paid content on publishers’ websites in exchange for solving a short puzzle based on an advertisement. This kind of gamified paywall is less intrusive and more accessible for a higher number of website visitors, engages users much better than a traditional ad, and allows publishers to increase their revenues. It’s a win-win situation for readers, advertisers, and publishers.

After examining the product idea and the startup’s needs, we came up with an adequate tech stack, which included Python and Django. Because the possibility of easy integration with publishers’ platforms was vital, Python turned out to be the right choice.

Another product that allowed us to try the powers of Python and Django combination was SHOPTHAT, a conversational commerce platform for the beauty industry. This project required creating a Messenger chatbot that was developed using Django, and an open-source library Python Social Auth was used as well to create authentication workflow.

Feel free to discover more Python case studies on our website: LESS_, a mobile app for selling and buying second-hand apparel, and Tresilio, a mobile-first web app that aims to improve mental health.

Faster, easier, better—that’s how Python benefits can be summed up. It’s a truly robust and versatile programming language that powers the current technology landscape and contributes to the growth of many innovative industries. If you were wondering if Python would be a good choice for your next startup, I think this article gives you a lot of reasons to do so!